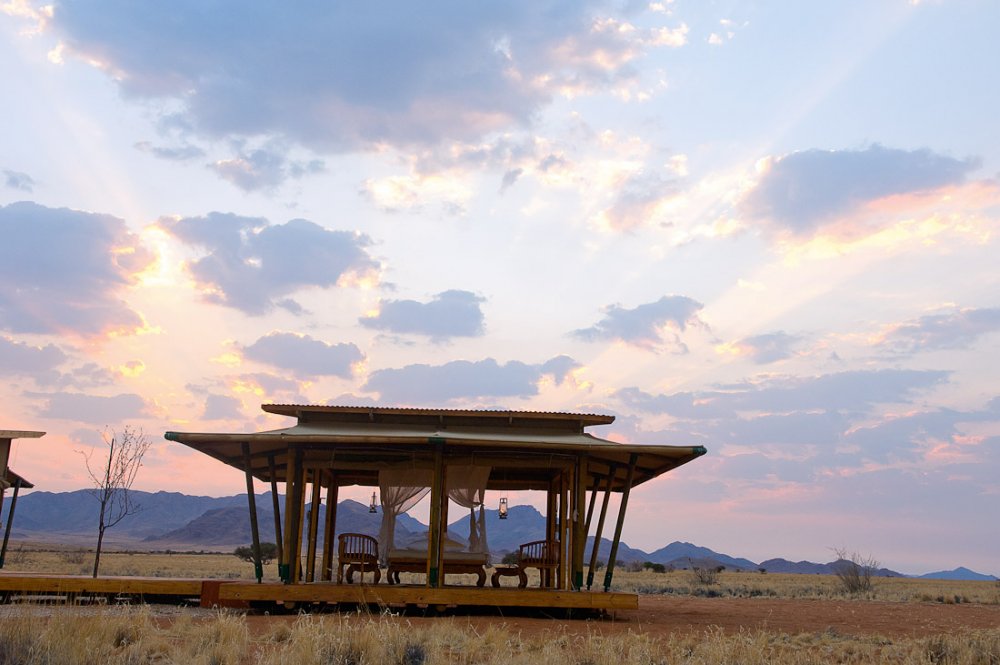 Why we love it

Wolwedans Private Camp is situated in the NamibRand Private Nature Reserve which is a seamless extension of the Namib Naukluft National Park and set amongst some of the most spectacular dunes and mountains in all of Namibia. It's sense of isolation, nostalgic atmosphere and sound conservation and responsibility practices makes it a wonderful place to visit.

The 2 private en suite rooms which cater for a maximum of 4 guests have open views onto the desert. Two kids can also be accommodated in the Sala. There is an open plan living room, study and private dining room. A wonderful desert sala encourages relaxation or private dining, with your own chef and butler service.

Explore a wilderness that is more than 100 kilometres long and 30 kilometres wide, where spectacular scenes emerge around every corner. Head out for the day with a packed picnic and escape the heat in the appropriately named shelter called the Hard Rock Cafe. Its possible here to adopt your own fairy circle, take a ballloon flight over the desert and also take a trip to Sossusvlei ( if you are travelling in your own plane) which boasts some of the largest mobile dune fields in the world.

NamibRand was previously farmland and has been returned to conservation thanks to the work of founder Albi Bruckner who has placed it in a Trust. Stephan Bruckner continues with his father's work and runs Wolwedans where you will find no more than one guest per 1000 hectares. Stephan also founded the Namibian Institute of Culinary Education (NICE) in Windhoek and the Desert Academy School both of which employ and train people from the local communities, in hospitality.

Kids: Children will be fascinated by the desert creatures and plants and will learn about the mysterious fairy circles which are found in the desert. They will be mesmerized by the local Nama staff when they announce the meals in their fascinating language of clicks. There is however no swimming pool at the lodge and nor are there many structured activities for kids.

How to get there

It is a 1 hour light aircraft flight from Windhoek. If you want to drive the distance is about 6 hours.